Nate The Great proved too strong for hot favourite Thunderous in the Jockey Club Rose Bowl Stakes at Newmarket.

Although without a victory since landing the rescheduled Dante Stakes at July in 2020, Thunderous has run some excellent races in defeat this season – most notably pushing Stradivarius close in the Yorkshire Cup in May.

As the highest-rated runner in a field of five for this two-mile contest, Charlie and Mark Johnston's stayer was a 4-5 shot to bring his lean spell to an end, but ultimately came up short.

The Andrew Balding-trained Nate The Great (4-1) won at Newmarket in May and was dropping in class on his return, having failed to beat a rival in either the Goodwood Cup or the Lonsdale Cup on his last two starts.

It was clear some way from home that Thunderous had a real fight on his hands and while he tried to come back at Nate The Great once headed, the leader was always doing enough under title-chasing William Buick and passed the post with a length and a quarter in hand.

Buick said: "He was down in class slightly today and capitalised on that. Fast ground has helped him. He has danced every dance and this was one of his better performances.

"He was very tough, very honest and gives his all every time."

Dr Bridget Drew OBE, director of Mildmay Racing, said: "I was worried he might have lost his confidence, but not here. He enjoys it here. He's only six, he's not that old for a stayer.

"It's great to see him get his head back in front. He's going on his holidays now, he's been going for over a year now so he will come home for a break, I think." 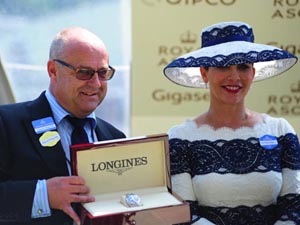 English/Ire news
Updated 3 months ago
Joyous scenes in Paris will live long in the memory for The Platinum Queen’s groom
Bravemansgame could potentially start off at Wetherby
First Receiver carries the King’s colours to victory at the Horse of the Year Show
Haggas still harbouring Champions Day hopes for Maljoom
Alseyoob takes Group One challenge in Fillies’ Mile
All systems go for Perfect Power on Champions Day
Polly picked for Fillies’ Mile honours
Stradivarius to enjoy deserved parade on Champions Day
Westover set to stay in training at four, with much to look forward to
Breeders’ Cup still under consideration for Mishriff