Racing and Sports highlight our standout plays at Australian TAB meetings for December 2.

A bit to learn here with a few facing the starter for the first time. The well-related ORIENTAL TYCOON (1) (full to G1 winner Booker) is unlucky to still be a maiden placing in all four starts to date including one around this Kensington circuit. Will be rock-hard fit for this and draws low for McDonald. Sure to prove very hard to hold out. SKYLIGHT SONG (7) is another knocking on the door of a maiden victory with three consecutive runner-up finishes. Looms as the main danger. JOYRIDER (4) has placed in all three career outings and should be in this for a long way. STRAIT ACER (2) went down by the narrowest of margins at Hawkesbury on debut and will have derived a stack of benefit from that race day experience. In the mix.
SELECTIONS: Oriental Tycoon to win.

As a FREE Racing and Sports offer, below is the Randwick Kensington Computer Card.

BLUE GUITAR (2) ran on to score nicely at Newcastle (Beaumont) last time out and the slight raise in trip will suit him even better. He's drawn well for Jennings and has plenty of upside. Just needs to repeat his latest effort to be getting the job done again. STARANE (5) went under by 0.5L last time out, just finding one better at Bathurst. Draw makes things a touch sticky, but the 2kg claim helps and his best form is good enough to be winning. JUMEIRAH BEACH (1) bolted in over 1280m at this track last time out, putting his rivals to the sword over the closing stages. Expected to be even better over this longer trip, he can find a good spot in running and make his presence felt. SHUBICK (3) scored nicely last time out and the form out of that race has been good. Not to be discounted.
SELECTIONS: Siding with Blue Guitar.

MUTINOUS (8) was a dominant winner when last seen at Tatura over 1000m, scoring by 3 lengths in track record time. The run prior he ran second at Sale in fast time to a very smart winner and he should get a charmed run from barrier three. CHOSEN BLONDE (7) looks suited dropping back to the 955m. Her last two have just been fair but her short course form is good and she can improve. ENFANT ROUGE (13) drops sharply in weight from last start at Kyneton when running second under 62kg. Lightly raced and drawn well. JUNGLE SENSATION (5) is in flying form. She was no match for a good winner here last time but is racing so well she goes in everything.
SELECTIONS: Mutinous to win.

Keen on ARKTIKA (2) who is racing well this time in. She showed promise as a younger horse and is starting to deliver, racing wide but running a close up fifth at Flemington last start. With any luck from the inside gate and Shinn riding, she should go close. ST LAWRENCE (3) is the watch. Unbeaten in two starts, he's got plenty of upside and looks set to measure up. FREEDOM ESCAPE (4) ran on well first up at Sandown-Lakeside over 1400m and will strip fitter. Right in the mix. DUNKERRY (6) comes here fresh off a poor effort but has promise and jumped out well.
SELECTIONS: Arktika to win.

TRUST BILL (8) was beaten 1.4L here on debut making solid inroads after settling toward the rear. Fitter and the extra 200m will suit. He's the testing material. CARASHAN CHLOE (10) impressed at Sale on debut beaten 3L after a tough run. Gave away a big start there the one after and was never in the picture. She's been freshened and can go a lot better. L'IL OUTBACK LASS (11) has to manage an outside gate but can improve and is in good hands. STRETFORD END (7) is a debutant who profiles well. The late betting will tell plenty.
SELECTIONS: Backing Trust Bill.

Competitive. DRAGON MISS (3) resumed in good order at Eagle Farm before delivering the Open win from the front at the Gold Coast. The rails gate advantages and fitter she can go on with it. COSSIE (6) is also speedy and presents off a 70 win at the Gold Coast. Gets Cahill for the apprentice and some weight relief. A player. PIVOTAL MOTION (7) was okay resuming at this level and is sharp second-up. Has more to give and can't be ruled out. MORT DOYLE (2) has just missed the last two in stronger and is also a live chance.
SELECTIONS: Going with Dragon Miss.

MADAME MO (2) was well backed last start and scored impressively when coming from sixth on the turn at Toowoomba to defeat her seven rivals over 1850m. Rates well in this field especially with Jake Molloy in the saddle. MAGIC MIKEY (6) sat in behind the speed and finished second last start as the favourite. Having his third run back from a spell and has placed in that state previously so on that score deserves respect and should be included in all exotic bets. AY BEE ARE (3) is coming off a win at Ipswich when scoring easily as the favourite, looks well placed to repeat the dose. POPULIST (1) didn't do much last start when finishing 10th of 12 runners after having to race wide for most of the race. He is better than that and has place claims here.
SELECTIONS: Madame Mo to win.

GEMINGA (6) led up on debut at Penshurst and was only caught late. She will have no problem with the drop in distance here and with the natural improvement that is expected from her first up run, she should be winning this. On top. MELINKE (7) finished runner up at his first start this campaign before hanging in at his next run, which made his fifth placing better than it looks on paper. He drops in weight and should be right in the finish. TOP UP (4) has placed twice on this track and is better than his last two efforts suggest. He has had a subtle gear change and is capable of turning his form around. Allow one more chance. CENTREFOLDSTAR (8) has mixed her form this campaign and after getting back early was doing her best work late last time out at Terang. The blinkers go on and she should settle a lot closer to the pace here. Include in all multiples.
SELECTIONS: Geminga to win. 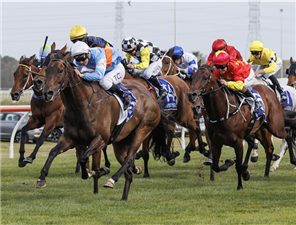