Awer Mabil has described his 25-metre, match-winning strike as a 'dream goal' as the Socceroos won in their Brisbane farewell before the World Cup.

Awer Mabil has dedicated his first Socceroos' goal in Australia to a late friend after helping the side past New Zealand 1-0 in their World Cup farewell.

The 27-year-old's sweet strike from about 25 metres was the difference in Brisbane on Thursday night in the first game between the teams in 11 years.

The Kenyan-born South Sudanese refugee swooped after Jackson Irvine had forced a turnover in the midfield, nudging the ball inside and thundering a shot into the left corner.

His eighth goal for Australia came after a move to Spanish La Liga outfit Cadix CF, where he has received limited game time.

"Yeah, it's nice to be home again and first goal on home soil. I've been waiting for a long time, it's nice to get a win of course," he said.

"It's been a tough week for our family; we lost one of our friends over the weekend, so not everyone could come because of that.

"That goal was dedicated to the one we lost.

"But I have some uncles here - as you know, us Africans we have a lot of cousins everywhere - it was good to get a win, see their faces and give them a hug.

New Zealand had plenty of ball but couldn't convert, coach Graham Arnold playing an aggressive man-on-man style that left spaces but pressed the All Whites defence.

"We see the shape he's in, even though he's not playing that much in Spain," Arnold said of Mabil.

The teams will turn around for a Sunday rematch in Auckland, with Arnold set to field an almost completely different starting 11 to the familiar squad that ran on in Brisbane. 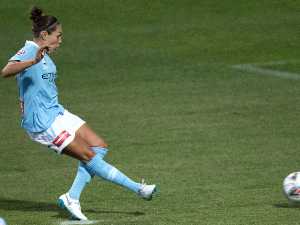